Skip to content
Diario AS: The Spanish company specialising in sports scholarships expands in America and the Middle East 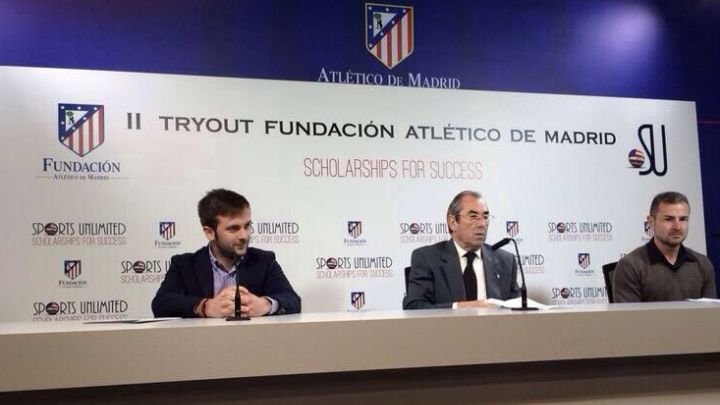 The option of studying a career outside of Spain with a soccer scholarship is being increasingly used by young Spaniards. Playing a sport in which you stand out and making that ability help you pay for your university studies is a very attractive outlet for many soccer players who prioritise education over their passion for soccer.

There’s a pioneering Spanish company in academic sports scholarships in the United States. Since 2012, Sports Unlimited has consolidated its position in ranking among the best companies in the world in the sector. And its international expansion continues. This multinational is due to open new offices in South America, the Middle East and the United States, which will join the company’s branches in other European countries and also South Africa, where it already has a major presence. This growth, in the midst of a global pandemic, demonstrates the confidence and strength of a project that is recognised by the most prestigious universities in the United States and that manages to get many of its scholarship holders to excel in the MLS and Liga MX.

According to a company statement, “in 2020, Sports Unlimited has managed to dodge the crisis and become one of the benchmark companies for Spanish athletes wanting to get a scholarship in the United States. A milestone and an endorsement of experience that the company is set to take to all corners of the planet with this new phase of international expansion that is burning stages at high speed with the opening of new offices in South America, the Middle East and the United States”.

“The current expansion is the outcome of long months of negotiation and in the end we’ve obtained a very exciting result for everyone. We’re going to have offices in South America, the Middle East and the United States; as well as a presence in other European countries and South Africa, for example”, explains Gerardo Piris, CEO of Sports Unlimited. In addition to expanding the business internationally, the great ties that bind Sports Unlimited together with top American universities will serve to expand the portfolio of services to other disciplines such as basketball, tennis, golf, athletics… “We’ve become the leading company in Spain in the world of soccer, which is an endorsement to be able to do it in other disciplines where we’ve already carried out very successful operations” explains Piris.

Lastly, one of the added values of Sports Unlimited is the experience provided by its CEO and FIFA agent, Gerardo Piris, who has an extensive track record as an intermediary for players in La Liga, MLS and Liga MX. “An incentive for many players who choose to get a scholarship in college soccer in the USA is that they can study and follow their dream of making the leap to professionalism. As a large number of scholarship athletes, at the end of their university degree, have made the leap to professional soccer in the MLS, USL or Liga Ascenso de Mexico” explains Piris, who in recent years has carried out outstanding operations in the American market with players such as Víctor Vázquez, Alejandro Pozuelo or Wilfred Zahibo, among others.

In the last five years, Sports Unlimited has successfully enabled more than 300 young people to enjoy the experience of studying and competing with a scholarship in the various North American university leagues; with that background they can now look to the future without setting themselves any limits. Sports scholarships offered by American universities cover from 50% to 100% of expenses, which include residence, sports medical insurance, enrolment and maintenance.

Sports Unlimited is in contact with more than 500 universities in the USA. Through their scholarship management service, they help parents and players to find the best option based on their level through a constant selection and recruitment process, and they prepare them to take part in tests known as try-outs in front of coaches from US universities. Some of these tests have been carried out through alliances and collaborations in iconic settings such as the Atlético de Madrid Ciudad Deportiva through its Foundation, the Barcelona FC Ciudad Deportiva through the Catalan Soccer Federation, or in Valencia FC Ciudad Deportiva in direct collaboration with the club. Now, Sports Unlimited will also have scouts throughout Europe, South America and various Middle Eastern different countries. 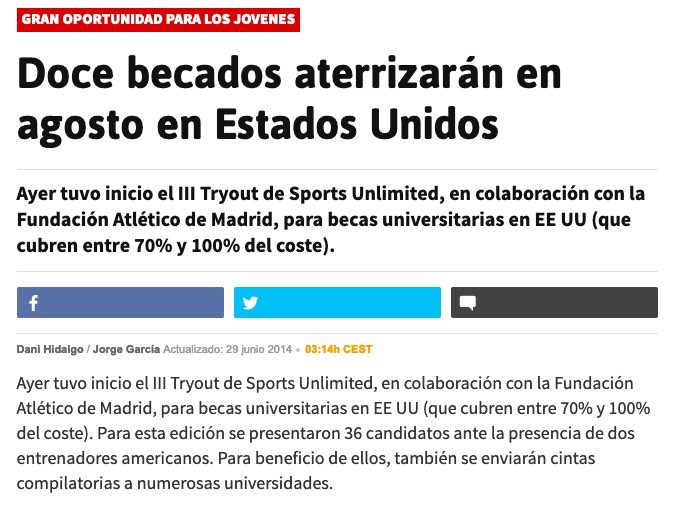 Diario AS: Twelve scholarship recipients are due to land in the United States in August 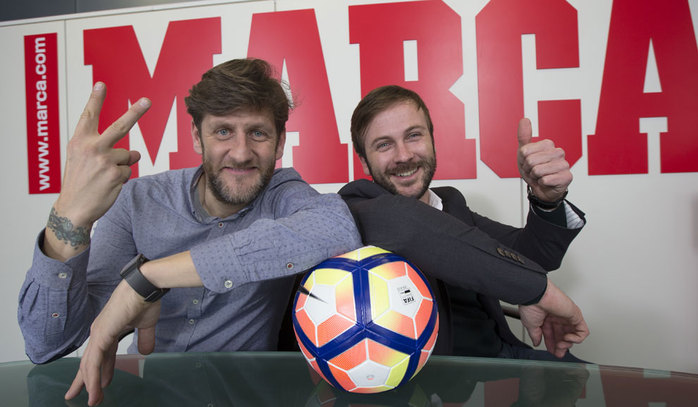 Marca: ‘Uncle Sam’ is calling you 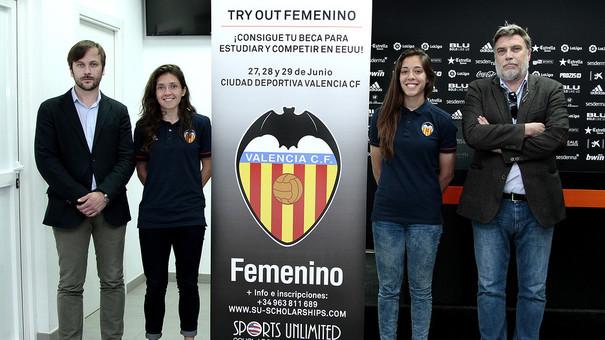